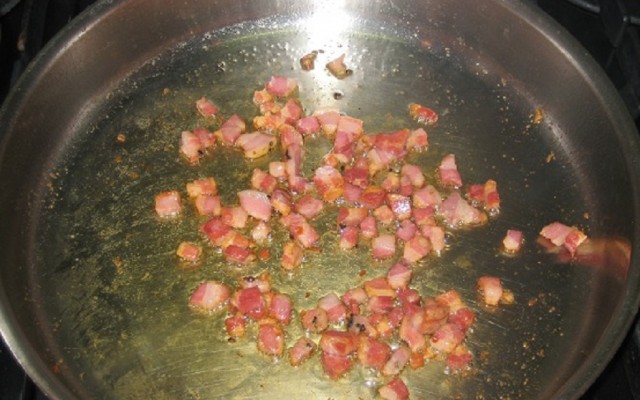 While no recorded history appears to exist on the origins of pancetta, there are shipping records from as early as the 15th. century that note the purchase of cured meats for long voyages. Most likely, cured meats were developed for just such a purpose. Two well known pancette (plural form) are the Piacentina (D.O.P.) from Emilia-Romagna and pancetta Calabrese (D.O.P.), although very good pancette are made in many other regions as well. The Calabria and Piacentina producers enjoy “Protected Designation of Origin Status” from the European Union, which consists of regulations made to protect local products from competition from unauthentic products made by foreign producers.

Simply, pancetta is dry salted, cured pork belly. There are two basic forms of pancetta that can be found in Italy: pancetta stesa, a flat shaped meat similar to American bacon. The other is pancetta arrotolata, a rolled version. Variations of these two basic forms of pancetta can also be found regionally throughout Italy, each influenced by climate, breed of pig, seasonings and the tradition of local production. Pancetta stesa is made by curing pork belly with salt and additional spices/seasonings. Curing time is between 5-7 days, then an additional 14–21 days, so the product can be hung in a cool / humid environment to dry and develop its unique flavor. Pancetta arrotolata is produced in the same fashion as stesa. Once the pancetta has cured, additional seasonings are added before rolling the meat into a log shape. It is tied and hung up to dry. The texture is softer, more delicate and has more moisture than pancetta stesa.

Piacentina is a regional pancetta and the pigs that are used must be from Emilia-Romagna or Lombardia and the processing can only take place in the province of Piacenza, specifically in Colli Piacentini. The curing process will last from 10-15 days with black pepper and cloves added for a unique flavor. Once cured, it is tightly rolled into a cylinder, tied and hung to dry for up to 3 months. One obscure fact about pancetta piacentina is that its manufacturing can not take place in an altitude any higher than 3,281.5 feet. Stagionata is another pancetta from the Emilia-Romagna region, located northeast of Bologna, situated near a branch of the Po River. The unique combination of salt, garlic, black pepper and rosemary intensify during the 6 month curing process. From the province of Trento (Trentino), which is part of the Alto-Adige region on the Switzerland/Austrian border, one can find smoked pancetta. The curing process takes place in a saline bath that includes garlic, white wine, cinnamon, cloves, juniper and lemon. The curing process lasts about 3 weeks before rolling the meat into a cylinder and smoking it over juniper wood. 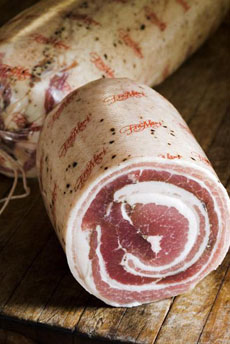 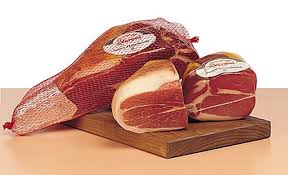 What is the Difference Between Pancetta and Prosciutto?

Pancetta is essentially Italian bacon, which comes from the belly of the pig and is cured.  Pancetta is the same cut of meat used to make American bacon and the two foods are somewhat similar. The pork belly is typically cured using a combination of salt and curing salts that often contain sodium nitrate. This curing process changes the meat so that it becomes an inhospitable environment for harmful bacteria.  After the pork belly has been cured for about a week or so, it is hung in a cool, damp room for several weeks, so that it can dry sufficiently. This gives the pancetta a signature flavor, which is somewhat similar to American bacon. Unlike bacon, however, the pancetta is not smoked after it is cured and dried, which gives it a different flavor from American bacon.

Prosciutto is Italian ham taken from the pork leg, cured and dried for a period of time, typically between several months and up to two years. Prosciutto is prepared in a similar way to the one used for pancetta, though there are noteworthy differences. The cut of pork used to make prosciutto is typically a hip and the curing process takes several weeks longer than pancetta, due to proscuitto being a thicker cut of meat. Once cured, the prosciutto is hung and allowed to dry and age like pancetta, but this process often goes for years.

Pancetta is an alternative to bacon, in any recipe where the meaty flavor of bacon is desired, without the smokiness. An almost indispensable ingredient in the Italian kitchen, pancetta is used to add flavor to vegetables and pasta. Roast it with potatoes, Brussels sprouts, squash or radicchio. Add it to any pasta dish for extra flavor. Wrap it around scallops or drape it over fish before grilling. Mince it into stuffings, or fry it crisp and sprinkle over soups. Pancetta’s calories are high and, since it is made from pig meat, also high in cholesterol. ( 2 ounces of pancetta add up to 200 calories.) If you wish to use a substitute, I would suggest turkey bacon. However, there are many Italian recipes that are made with pancetta and the flavor of the dish is based on this ingredient. Again, moderation is the key. I always use the least amount I think a dish needs of an ingredient that requires moderation. Start by cutting the amount in half, as I have done in the recipes below. You can always add more if the taste requires it.

1. Tightly wrap each asparagus spear in a slice of pancetta and refrigerate until chilled, about 20 minutes.

2. Light a grill or preheat a grill pan. In a small bowl, stir the orange zest and juice with the mustard and olive oil; season with salt and pepper. Grill the asparagus over moderate heat, turning often, until they are just tender and the pancetta is crisp, about 5 minutes total. Transfer the asparagus to a platter and drizzle with some of the dressing. Sprinkle with the thyme and serve. 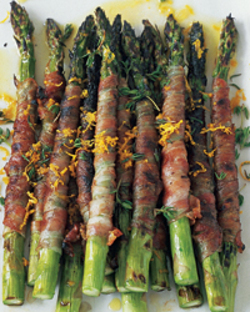 Pasta With Onion and Pancetta

In a large, deep skillet, sauté the pancetta in the olive oil, and after a minute or two, add the onion. Cook until golden. Meanwhile, cook the pasta according to package directions.  When the pasta has a minute or two left to cook, drain it, retaining 1 cup of the pasta cooking liquid. Add the drained pasta to the pancetta and onion in the skillet and mix well. Add reserved pasta water and cook for a minute. Place pasta into a serving bowl and add the cheese and a generous amount of black pepper. Salt only after you’ve tasted it, since the salt may not be necessary due to the saltiness of the pancetta. 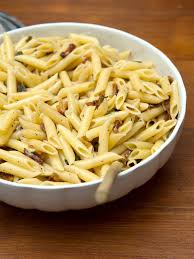 Preheat the oven to 450 degrees F. Cut half the lemon into 4 thin slices and reserve the half. Place the fish in a greased baking dish, squeeze the remaining lemon over each side of the trout and brush each with a 1/2 tablespoon of garlic paste. Season the fish with cracked black pepper. Top each fish with thyme and a lemon slice. Wrap the pancetta around the fish holding the slice of lemon and thyme in place. Bake the fish for about 20 minutes, making sure the fish is cooked through. Serve the fish with herbed Italian cannellini beans or green beans. 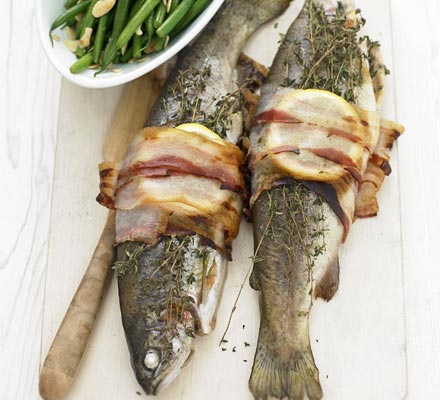