The Cuisine Of Italy – Bologna 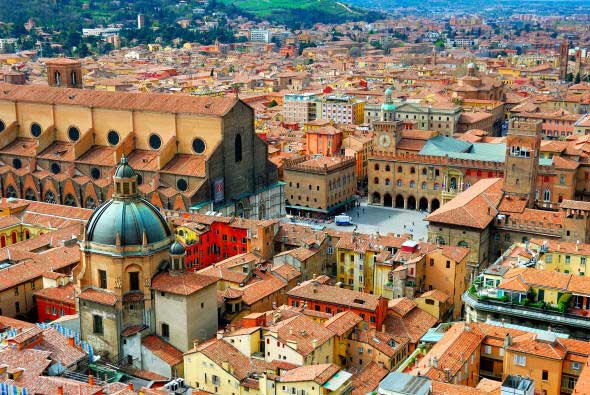 Bologna is well-known for its food, architecture, music and for its independent political thinking, and is now regarded to be one of the most attractive cities in Italy. Bologna is the capital of the Emilia-Romagna region in northern Italy and is less than an hour inland from the east coast, about halfway between Florence and Milan. Nearby cities of interest include Modena and Ravenna.

The history of Bologna began with the Etruscans. In the VI century B.C., the city bore the Etruscan name “Felsina”.  Later the Romans renamed the city Bononia, from which the current name, Bologna, is derived.  At its peak, it was the second city of Italy, and one of the most important of all the Empire, with various temples and baths, a theatre, and an arena. Pomponius Mela, author of A Description of the World, included Bononia among the five wealthiest cities of Italy. Although fire damaged the city during the reign of Claudius, the Roman Emperor Nero rebuilt it in the 1st century AD.

In 1088, the Studio, later known as the University of Bologna, was founded and could boast notable scholars of the Middle Ages in attendance, such as, Irnerius, Dante, Boccaccio and Petrarca. The university received a charter from Frederick I Barbarossa in 1158, but in the 19th century, a committee of historians led by Giosuè Carducci traced the founding of the University back to 1088, which would make it the oldest university in the world. 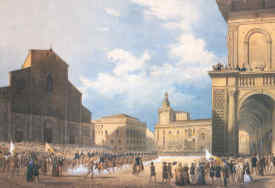 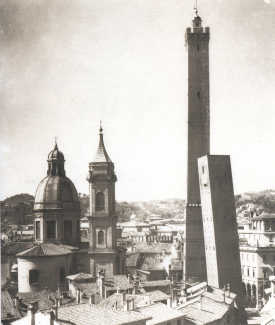 In the Medieval period, Bologna was an important and thriving city. Between the XII and XIV centuries, some of the city’s most important buildings were constructed: among these were the Two Towers, the traditional symbol of the city, the Basilica of San Petronio and King Enzo’s Palace.

In 1256, Bologna passed the Legge del Paradiso (“Paradise Law”), which abolished feudal serfdom and freed the slaves, using public money. At that time the city centre was full of towers (perhaps 180), built by the leading families, notable public edifices, churches, and abbeys. It was the next most important city after Rome but, always, managed to maintain relative autonomy. In the XVII and XVIII century, the city expanded, above its outside walls. In the middle of the XVIII century, the Portico of San Luca was built.

Bologna is also a city famous for its painters, such as the Carracci brothers, Guido Reni and, in the XX century, Giorgio Morandi, in which his famous still life works are exhibited at the Giorgio Morandi Museum, inside the Town Hall (Palazzo Comunale).

The Bolognese are also known for their fierce independence; throughout history the city’s rebellions against the papal rulers and injustice illustrates this spirit. Even today, you are sure to see locals in heated political discussion and debates about the day’s topics.

Bologna has a rich music heritage, where music plays a significant part in everyday life. The city of Bologna is an important place for Italian and international events and festivals. The city hosts the International Composition competition in August, dedicated to the memory of the victims of the Bologna railway station slaughter in 1980, the European Jazz Festival and the Bologna Festival, dedicated to classical, baroque and contemporary music. It is also the seat of “Angelica”, an international festival of contemporary music and of the Zecchino d’Oro Festival (children’s choir festival). Additional summertime entertainment options include a daily open-air disco in Parco Cavaioni on the outskirts of the city and the city-sponsored Bologna Sogna series, with concerts at museums and buildings around town. During the rest of the year, nightlife events abound for young people in the university area.

The Food of Bologna:

The cuisine of the Emilia-Romagna region is one of the best in Italy and some of Italy’s most famous foods come from this region. Handmade egg pasta and stuffed pasta, especially tortellini, are specialties of Bologna and, of course, there is the famous Ragu alla Bolognese, a long cooked meat sauce. In truth, there probably isn’t one authentic recipe for bolognese sauce.  (See my post for my version:  http://jovinacooksitalian.com/2012/04/21/two-sauces-for-everyday-meals/)  Bologna is also known for its salami, ham and cheese.

D.O.P stands for “Denominazione di Origine Protetta”, which means Protected Designation of Origin.  The D.O.P designation guarantees that the products come from a certain location in Italy. Also, the methods of production must be traditional, and have fixed storage guidelines. 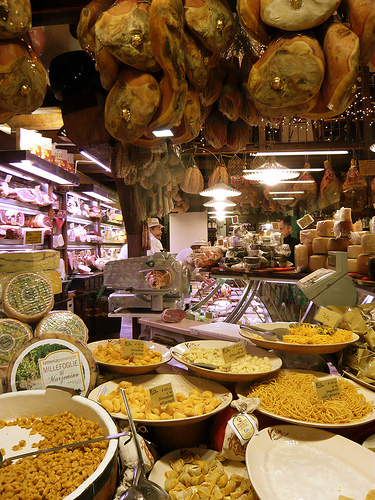 Parma ham (also known as Posciutto Crudo di Parma) –  (D.O.P.)  This is ham that’s been salted for several weeks, rather than cooked. It has a melt-in-your-mouth texture, and it’s made — of course — in Parma. 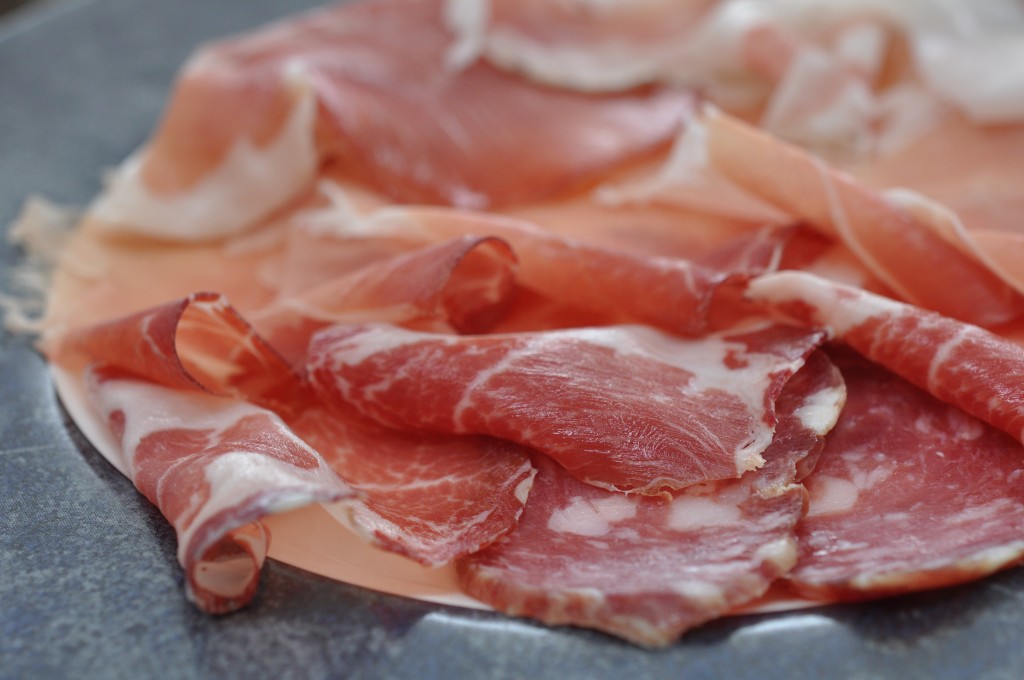 The home of Prosciutto di Parma and other meat delicacies.

Mortadella di Bologna. Spiced pork from Bologna. This is where we get our word “bologna” from, but this is not the supermarket lunchmeat.

Parmigiano Reggiano.  A D.O.P. protected cheese, made in Parma and Reggio Emilia.  You might know it as “parmesan.” However, unless you’re holding the D.O.P-protected Parmigiano-Reggiano in your hands, you’re not really tasting the real thing.

Asparagi ravennati.  Famous asparagus of Ravenna. Look for it in risotto.

Anguilla alla ravennate. Eel sautéed in butter with tomatoes, and a specialty in Ravenna.

Lasagna. Some Bolognese claim that lasagna was invented here. Regardless of where exactly it originated, the version made in Bologna is one of the best.

Tortellini. The pasta that has become a favorite worldwide — those little pouches filled with cheese or, in some cases, meats (although that’s usually for their larger cousin, tortelloni) — was invented in the Emilia-Romagna region. And some fascinating legends are connected with how it got its start. Our story: While traveling, the pope’s daughter Lucrezia Borgia checked into the small town of Castelfranco Emilia, near Modena. The innkeeper was captivated by Lucrezia, and in the night, he couldn’t help himself — he peeked through the keyhole into her room. All he saw… was her navel. In typical Italian fashion, he turned his desire into inspiration, making a new pasta in the shape of Lucrezia’s navel in homage. A second story: to the Bolognese, the shape of tortellini was inspired by the female navel. One story, hailing from the 17th century, claims that tortellini was created by a cook who molded the pasta in the navel of a Bolognese woman.

Capellettacci. Pasta filled with chocolate-flavored chestnuts and served with olive oil and pepper.

Tagliatelle alla Bolognese. Not exactly what we think of when we think “Bolognese sauce,” this is a thick ragu of onions, carrots, pork, veal, and with just a little bit of tomato.

Amaretti or amarelle. Almond-flavored macaroons, a specialty of Modena. Today, bakeries throughout the region, and in Italian communities around the world, carry Amaretti di Saronno, but it’s worth the (small) effort to make them yourself. The recipe is simple, and fresh from the oven, they have a crisp-yet-tender texture that’s beyond compare.

Pampepato di cioccolato. A Christmastime cake made of cocoa, milk, honey, spices, almonds and lemon peel, then covered with candy-studded chocolate frosting. It dates back to the 15th century, and an 11-pound version was even given by the city of Ferrara to General Eisenhower during the World War II.

Bologna Inspired Recipes For You To Make At Home 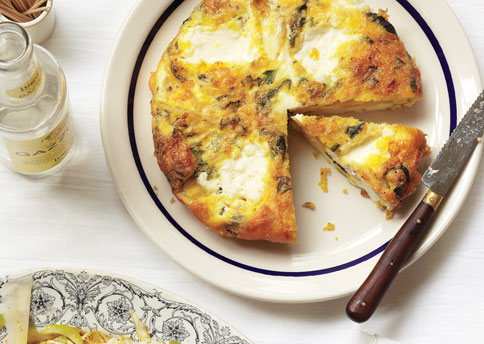 The key to making this dish is to have all the ingredients prepared before you begin sautéing the onions.

Cook until frittata begins to set, about 2 minutes. Place in oven; bake until just set, 7-9 minutes. Slide the frittata onto a platter. Cut into wedges; serve hot or at room temperature.

The balsamic dressing below is quite versatile; try it with baby greens or grilled vegetables.

Make a double batch and refrigerate leftovers for up to 2 weeks.

Place the shallots, oregano, balsamic vinegar, olive oil, salt, and pepper in jar. Close with a tight-fitting lid and shake to blend.
Pour the dressing over the fennel in a bowl. Toss, taste for salt, adjust if needed, and marinate for 15 minutes. Serve over a bed of baby greens or arugula.

These pork chops with prosciutto and cheese are somewhat more involved than some other pork chops, but will be a delightful surprise at the table, and are well suited to company.

Trim all the gristle and fat from the cutlets, then split them in half, leaving the halves attached only along the bone, so that the cutlets will open like a book.

Open the pork and fill each with a piece of prosciutto and a piece of cheese, trimming their edges so nothing sticks out.

In a skillet large enough for all the pork chops to lie flat, heat the oil with the bay leaves. Place the pork chops into the pan and brown them on both sides, turning them carefully. Season the meat with the minced garlic, herbs, salt, and pepper, cover, and cook over a medium-low heat for about 15 minutes, turning the meat occasionally.

Some agnolotti pasta are square or rectangular in shape, while others, especially from Bologna form a half-moon circle.

A quick way to achieve small stuffed pastas without all the kitchen labor, is to cheat a little, by using Wonton (what Chinese!) wrappers.  Not authentic but quick and tastes like the real thing.

Finely chop mixture in the processor. Transfer to a medium bowl. Mix in cheese. Season to taste with salt and pepper. Mix in egg.

Lightly flour a baking sheet. Arrange 12 wonton wrappers on work surface, keeping the rest covered with a towel to prevent dryness. Spoon 1 teaspoon filling in center of each. Brush edges with water. Fold each wrapper in half, forming a triangle or rectangle. Press edges together and form into desired shapes. Transfer to the floured baking sheet. Repeat with remaining wrappers and filling. (Can be made 8 hours ahead. Cover with plastic wrap; chill.).

After the scaloppine are browned in olive oil, the pan is deglazed with chicken stock and balsamic vinegar to create a rich sauce. Add a 1/2 pound of mushrooms with the shallots if you like this addition.

Add the shallots (and mushrooms, if using) and garlic to the skillet; cook, stirring, for 1 minute. Add the broth and reduce over high heat for 1 minute, scraping up any browned bits from the bottom of the skillet. Add the balsamic vinegar; cook until the sauce reduces and becomes syrupy, about 1 minute. Stir in the basil, return the chicken to the skillet, and turn a few times to coat with the sauce and to warm through. Serve hot.

Tagliatelle with Prosciutto and Orange 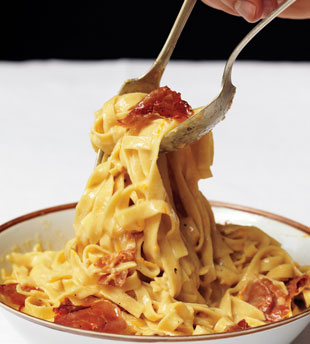 Add reserved pasta water, orange juice, half of the orange zest and half and half; bring to a simmer. Add pasta; cook, stirring, until sauce coats the pasta, about 1 minute. Season with salt and pepper. Stir in cheese and divide among warm bowls. Sprinkle remaining orange zest over pasta. 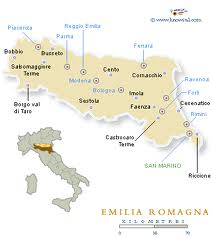