A casserole, from the French word for “saucepan”, is a large, deep dish or pot used both in the oven and as a serving vessel. The word casserole is also used for the food cooked and served in such a vessel. Casseroles usually consist of pieces of meat or fish, various chopped vegetables, a starchy binder, such as flour, potato or pasta, and, sometimes, a crunchy or cheesy topping. Liquids, such as stock, wine, beer, cider, or vegetable juice, may be added when the dish is assembled for baking. Casseroles are usually cooked slowly in the oven, often uncovered. They may be offered as a main course or a side dish, and may be served in the dish in which they were cooked.

Types of casserole entrees include ragouts, hotpots, cassoulets, tajines, moussakas, lasagnas, shepherd’s pie, gratins, rice or macaroni timballi, and carbonnades. A distinction can be made between casseroles and stews: stewing is a cooking process whereby heat is applied to the bottom of the cooking vessel (typically over a fire or on a stove), whereas casserole cooking is generally done in an oven where heat circulates all around the cooking vessel. Casseroles may be cooked covered or uncovered, while braised dishes are typically covered to prevent evaporation.

In 1866, Elmire Jolicoeur, a French Canadian immigrant, invented the precursor of the modern casserole in Berlin, New Hampshire. The casseroles, we know today, are a relatively modern invention. Early casserole recipes consisted of rice that was pounded and added to a savory mixture of meats such as chicken or sweetbreads. Some time around the 1870s, casseroles underwent a change and cooking in earthenware containers and the idea of  a one-dish meal became popular in America. By in the 1950s, new forms of lightweight metal and glassware appeared on the market and, by the 1970s, casseroles took on a less-than sophisticated image.

Southern Italy is the land of combinations, so casseroles fit in perfectly. While they certainly enjoy a piece of simple grilled fish with lemon juice drizzled on it, you will find other dishes, such as lasagna, eggplant parmesan, or baked codfish with bay leaves and fennel. The mixing of certain vegetables such as eggplant, tomatoes and potatoes to make a colorful Ciambotta, a mixed vegetable stew, cooked in four separate steps, is unique. The cooking of the southern Italians is, also, evolutionary. Take for example the Teglia (or tiella) Barese, a Pugliese casserole classic from Bari (mussels baked in a casserole with rice). This dish was not thought out or designed. It just happened through time.

The Arab people introduced rice into southern Italy, somewhere around the year 800. Additionally they occupied Spain and introduced it there (perhaps giving us a first look at paella), and probably inspiring the combination of rice and mussels. After cooking this dish many times, the cook added just a bit of vegetables because they were at hand or because the yield had to accommodate one more mouth. The cheese, always at arm’s length, soon found its way into the dish. The addition of potatoes and tomatoes dates this version of the Tiella, to after the mid-1500’s or so, because potatoes were not known in Italy before then. They came from the new world along with tomatoes, chocolate, corn and turkey. After the Tiella made its way this far, it became a classic dish. Similar Casseroles were conceived, ingredient by ingredient, probably by necessity or availability, and eventually they became standards. 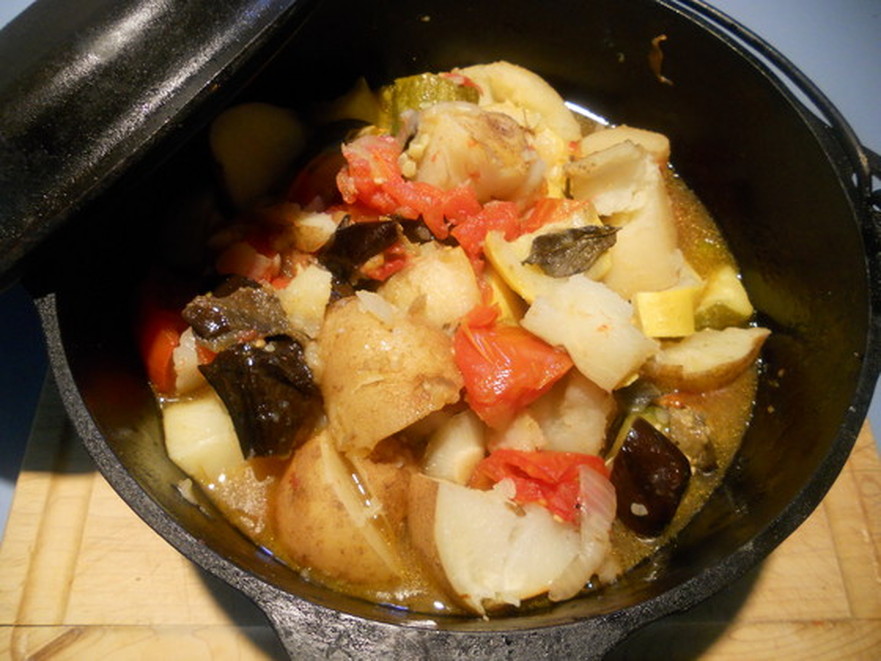 Good as a side for Roast Pork

Trim off the stem and leaves from the eggplant, peel if you prefer and cut it crosswise into 1/4 inch thick slices. If young and very fresh there is no need to salt the slices (otherwise see below).

Peel the potatoes and cut them crosswise into 1/8 inch thick slices. Core the peppers and discard the seeds, cut them in 1/4 inch slices lengthwise. Peel and core the tomatoes, and chop them.

Put just enough oil in a large frying pan to barely cover the bottom of the pan. When the oil is hot, saute the eggplant slices until they are nicely browned on both sides turning once. Add more oil as needed. Remove them to a large casserole that will eventually hold everything.

Alternately, you can grill the eggplant slices instead of sauteeing. Brush slices with olive oil and grill on a stove top grill until browned and soft.

Meanwhile, heat the oven to 375 degrees F.  Scatter on the chopped tomatoes, the garlic, salt and pepper and mix well but carefully.

Bake for about 30 minutes or until bubbling. Serve hot on its own, or use as a contorno, side dish, for roasted or grilled meat, fowl or big fish.

NOTE: To remove excess water from eggplant or remove bitterness in older ones, sprinkle both sides of the slices liberally with salt. Place in a non-reactive colander overlapping each other. Place a bowl or a dish inside the colander on top of the eggplant slices, and place a 1 or 2 pound weight on it. Let stand for about 1 hour. Rinse slices quickly under cold running water and pat dry. 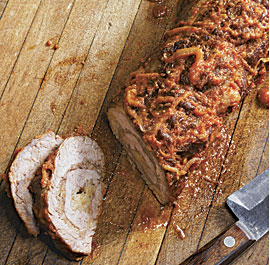 This is an easier version of the Italian-American classic. The traditional dish uses small slices of  beef round, but in this recipe,  a whole flank steak is used because it’s easier to stuff and roll one large cut and flank steak has great flavor.

Set the flank steak on a large cutting board. Using a sharp knife, slice the steak lengthwise down the middle (about 1/4 inch) and cut toward the edge without cutting all the way through the meat. Repeat with the other side and open it up like a book. Using a meat mallet, flatten the meat so it is about 1/4 inch thick. Sprinkle both sides of the meat with 1/2 teaspoon salt and 1/2 teaspoon pepper.

For the stuffing, put the mozzarella, Parmigiano-Reggiano cheese, bread crumbs, and basil in a food processor and pulse to combine. Sprinkle the stuffing evenly over the beef, leaving a one inch border all around, and roll it up lengthwise, jelly roll–style, enclosing the stuffing. Secure with kitchen twine in five or six places.

Heat oil in a large Dutch oven over medium-high heat until it’s shimmering. Add the beef and cook until it browns and releases easily from the pan, about 2 minutes. Flip and cook the other side until browned, about 5 more minutes. Transfer to a large plate.

Add the onion to the pan and lower the heat to medium. Sprinkle onion with 1/2 teaspoon salt and cook, stirring, until the onion wilts completely and turns a light brown, about 8 minutes. Add the red wine and cook, stirring, until almost completely reduced, about 2 minutes. Add the tomatoes and red pepper flakes and bring to a boil. Reduce to a gentle simmer and tuck the meat and mushrooms into the broth. Cover and cook, turning the meat occasionally, until the meat becomes tender and cuts easily with a paring knife, about 1-1/2 hours. Set the meat on a cutting board and let rest for 10 to 15 minutes. Thinly slice and serve topped with the reheated sauce and vegetables. Serve with Sautéed Broccoli Raab and a Potato Gratin or pasta. 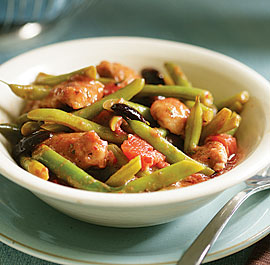 Season the chicken with 1/4 teaspoon salt and 1/4 teaspoon black pepper. Spread the flour on a plate, and lightly dredge the chicken in the flour. Heat the oil in a large Dutch oven or flameproof casserole over medium-high heat until the oil is shimmering hot. Cook the chicken in two or three batches (to avoid crowding the pot) until well browned on both sides, 2 to 3 minutes per side. Transfer each batch to a plate as it finishes.

Return the chicken to the pot, add the green beans, garlic, 1/4 teaspoon salt, and 1/4 teaspoon black pepper, and cook, stirring, for 2 minutes. Add the red wine and cook until it almost completely evaporates, 1 to 2 minutes. Add the tomatoes and their juices, rosemary, and red pepper flakes. Bring to a boil, then lower the heat to a steady simmer. Cover, leaving the lid slightly ajar, and cook, stirring occasionally for 15 minutes. Add the olives, and continue simmering with the lid ajar until the chicken and green beans are very tender, about 5 minutes more. Adjust salt and pepper to taste. Serve with Garlic bread. 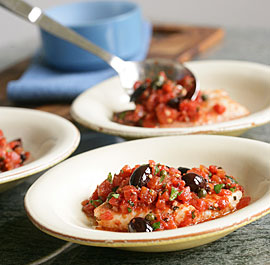 Black sea bass makes a good substitute for snapper in this recipe, if red snapper is not available in your area.

Position a rack in the center of the oven and heat the oven to 325°F. Season the snapper all over with salt and pepper. Let sit at room temperature while you prepare the sauce.

Heat the olive oil in a 12-inch ovenproof skillet over medium-low heat. Add the garlic and cook, stirring, until softened but not golden, about 1 minute. Add the tomatoes and their juice, anchovies, olives, 2 tablespoons of the basil, capers, and pepper flakes to the pan. Bring the sauce to a brisk simmer and cook, stirring occasionally, until the tomatoes are tender and the juices have reduced to a saucy consistency, about 8 minutes.

Nestle the snapper fillets into the sauce, spooning some on top to keep the fish moist. Tightly cover the pan with a lid or aluminum foil and braise in the oven until the fish is almost cooked through, 10 to 15 minutes, depending on thickness.

With a slotted spatula, transfer the snapper to 4 shallow serving bowls. If the sauce seems too thin, simmer over medium-high heat until thickened to your liking. Stir the remaining  basil, the oregano and vinegar into the sauce and spoon it over the fish. Serve with polenta or couscous.

Heat the olive oil in a heavy pot over medium-low heat. Add the sausages and cook, until browned, 10 to 12 minutes. Using a slotted spoon, transfer to a large bowl lined with paper towels. Remove paper after a few minutes.

Meanwhile, cook the pasta in a large pot of boiling salted water until just tender, about 12 minutes. Drain well and add to the sausage bowl along with the marinara sauce, tomatoes, basil, oregano, pepper flakes, diced mozzarella, salt, and pepper. Toss well. Transfer to the prepared baking dish and cover the top with the mozzarella slices.

Bake until the cheese is melted and the pasta is heated through, about 20 minutes.