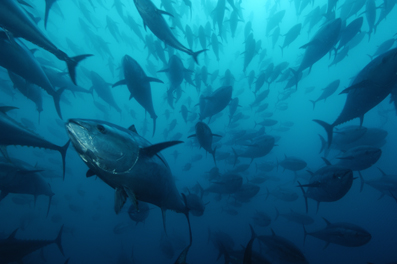 Only about one percent of tuna comes to the market to be sold fresh. The rest goes to the cannery, because canned tuna is America’s most popular fish.

The word tuna dates back only to 1880 in print and is attributed as a Spanish American derivation of the English counterpart, tunny. It is derived from the Latin Thunnus, the name of its scientific genus. Tuna has been fished from the warm, temperate parts of the Mediterranean Sea and the Pacific, Atlantic, and Indian Oceans since ancient times. As a member of the mackerel family, tuna naturally has a stronger, more robust flavor than whitefish.

Tuna meat differs from that of many other fish because it is pink or red rather than white. It is one of the most widely consumed types of fish, however, some varieties are endangered and therefore avoided or protected. In addition, the high levels of mercury in some kinds of tuna is a health concern, particularly for children and pregnant or nursing women.

Tuna can cruise up to 55 miles per hour and they are constantly in motion. To keep this speed machine going, the tuna eats up to ten percent of its body weight daily. Depending on the variety, weights average from 10 pounds up to 600 pounds per fish. The majority of the commercial tuna harvest comes from California. The average consumption of tuna in America is 3.6 pounds per person, per year, most of which is canned.

Tuna are saltwater fish and there are nine different species.

The different species are:

Tuna is a popular fish in the Italian cuisine. All along the Sicilian coast there were villages called tonnare that people would inhabit during the tuna season; when the tuna arrived (they’re migratory fish) the men would take to the sea, stringing nets that hung down from the surface like curtains, forming a corridor that guided the tuna into a final net with a bottom strung between the boats or in an inlet.

Like many other things, the traditional tonnara has fallen into decline, a victim of increasing industrial pollution in the Mediterranean and overfishing by commercial fleets that operate out at sea. However, some tonnare survive and, aside from the use of outboard motors and synthetic materials in the nets, little has changed in the fishing technique. Most of the catch is preserved, in part, by packing in oil.

Issues Over How Fish is Caught

Fishermen use different methods to catch tuna, however, methods that do not catch unwanted fish and sharks are preferred by environmentalists concerned about worldwide oceanic health.

Purse seines (see diagram) are very large circles of netting that can be lowered into the ocean around a school of fish. Fishermen then pull a drawstring at the bottom of the net closed and pull the net on board or use smaller nets to remove fish from the purse seine. Purse seining is most commonly used to catch tuna, however, this method frequently catches a considerable amount of bycatch or other fish including dolphins, very young tuna and sharks. Use of “fish aggregating devices,” floating objects around the netting, increases the bycatch when purse seining is used. Yellowfin, tongol, skipjack and blackfin tuna caught by this method have received an “avoid” ranking from the Monterey Bay Aquarium Seafood Watch due to concerns about by catch. Longline fishing (see diagram) involves stringing a fishing line of anywhere from 1 mile to over 50 miles in length. Smaller fishing lines are then hung vertically at spaced intervals with baited hooks to catch tuna near the surface of the open sea. Longline fishing for tuna can result in bycatch of endangered and threatened species including sharks and sea turtles. With the exception of tuna caught by longline near Hawaii or in the United States Atlantic Ocean, longline caught tuna is rated “avoid” by the Monterey Bay Aquarium Seafood Watch. Trolling (see diagram) for tuna is a straightforward method where fishermen use a standard hook-and-line beside their boat or towed behind their boat. Trolling for tuna in this way is an environmentally sound way to catch tuna as lines are promptly reeled in after a fish takes the bait and fishermen can easily release unwanted fish. Troll fishing is one of the most environmentally friendly ways to catch tuna. Monterey Bay Aquarium’s Seafood Watch advises against eating any kind of Bluefin tuna at this time because the species are severely endangered. Bluefin is the most popular type of tuna used in sushi and is considered a delicacy. It has suffered extensive overfishing as a result. In addition, the great majority of Bluefin tuna is still wild-caught using methods that endanger other marine life, such as dolphins and sea turtles.

Tuna has been a popular fish for human consumption for centuries and has significantly suffered from overfishing as a result. Tuna farming has recently become more popular as a way to harvest the meat more safely. The different varieties of Bluefin are most widely used in these farming operations.

Tuna is a great source of omega-3 fatty acids, 464 mg per serving to be exact, which promotes heart health by reducing erratic heartbeats, lowering your risk of heart attacks and blood clots. Reducing blood clots has an added bonus of preventing and reducing risk of stroke.

A major health benefit of tuna, thanks to its high levels of selenium, is to flush toxins out of the liver. This promotes overall good health, which is a key factor in successful and ongoing weight loss.

Another health benefit of tuna is preventing and controlling high blood pressure. Thanks to the omega-3 and polyunsaturated fatty acids, tuna is a great way to control hypertension as well as prevent it for those at risk.

3. Sprinkle tuna with kosher salt and black pepper. Add tuna to skillet on top of tomato mixture. Cover and cook over medium heat for 5 minutes. Uncover and cook for 10 to 15 minutes more or until tuna flakes easily when tested with a fork and is slightly pink in the center.

Cut fish into 4 serving-size pieces. Brush both sides of fish with oil and lemon juice; sprinkle with kosher salt and pepper. Sprinkle garlic and rosemary evenly onto fish; rub in with your fingers.

For a charcoal grill, place fish on the greased rack of an uncovered grill directly over medium-hot coals. Grill for 8 to 12 minutes or until fish flakes easily when tested with a fork, turning once halfway through grilling. (For a gas grill, preheat grill. Reduce heat to medium. Place fish on grill rack over heat. Cover and grill as above.)

Broiler method: Place fish on the greased unheated rack of a broiler pan. Broil 4 inches from the heat for 8 to 12 minutes or until fish flakes easily when tested with a fork, turning once halfway through broiling.

Spaghetti with Tuna and Cherry Tomatoes

1. Bring a large pot of liberally salted water to a rolling boil and add the spaghetti. Meanwhile, chop the tuna (you should have about 1 cup); set aside.

2. Heat the olive oil in a large skillet over medium heat. When the oil is hot, add the garlic, chiles and fennel. Sauté, stirring frequently, until the garlic is lightly golden and the spices are fragrant, 2 to 3 minutes.

3. Add the cherry tomatoes and the anchovies and cook for about a minute to break down the anchovies. Add the tuna and use a wooden spoon to break up the tuna and the tomatoes into a chunky mixture. Add red wine vinegar and salt to taste. The flavor should be sweet, fragrant and bright. Keep warm over low heat until the pasta is done.

4. When the spaghetti is done, drain it, reserving about 1 cup of the cooking water, and add the noodles to the skillet. Turn the heat to high, add the reserved pasta cooking water and cook, tossing the noodles to coat lightly with the sauce. Mix in the basil, season to taste with salt and serve immediately. 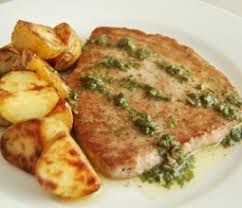 Combine a quarter cup of olive oil with the onion, vinegar and parsley to make a marinade; season with salt and pepper and marinate the fish for about an hour, turning frequently.

In the meantime cut the potatoes and preheat your oven to 350 degrees F.

Lay the fish in a baking dish, spoon some of the marinade over it.  Arrange the potatoes around it. Sprinkle everything with more marinade and the juice of the two lemons. Bake for 40 minutes and serve.

Grate the carrots directly into a bowl. Crumble the tuna into the bowl as well, add the garlic, peas, the lemon juice and zest, stir in 5 tablespoons olive oil, season lightly with salt, dust with a grating of pepper, mix well, and chill the mixture, covered, for at least an hour in the refrigerator.

Bring pasta water to a boil, salt it, and cook the pasta. Drain it when it’s still fairly firm. When the pasta has cooled, stir it into the tuna mixture and season the pasta with the minced herbs.

If you don’t plan to serve it immediately, cover it and keep it chilled in the refrigerator.

Note: You can also use fresh tuna; you’ll need 2-8 ounce tuna steaks, which you will want to grill 3-4 minutes per side (season them with salt, pepper, and lemon juice) and dice.