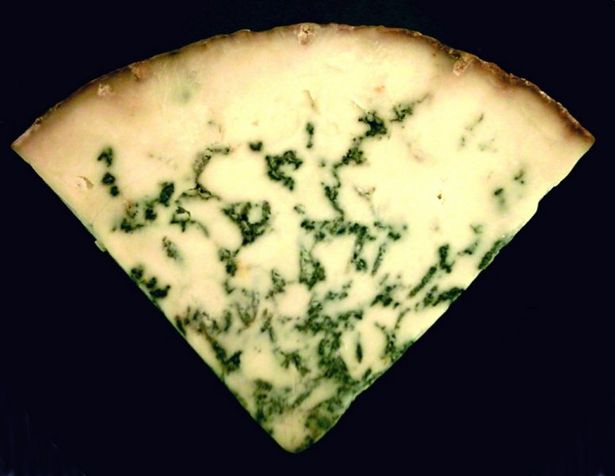 Gorgonzola is one of the most famous Italian cheeses in the world. It is known for its blue veins and unique flavor, which is both sharp and sweet. Gorgonzola is a member of the blue cheese family of cheeses. The body of gorgonzola cheese is an ivory color. It has pronounced blue-green veins and a gray-gold or a reddish-brown, wrinkled crust. Gorgonzola comes in a circular shape.

This cheese gets its name from the small town of Gorgonzola, located near Milan and the cheese has been produced for centuries. Although we do not know the exact date it was first produced, we know it was probably around the late Middle Ages. The cheese itself was first produced in the ninth century, although its full blue green-gray color was not fully developed until the 11th century. Gorgonzola was originally aged in caves, where the blue veins in the cheese developed from spores. At one time, Gorgonzola was called “Stracchino” cheese and was used to cure stomach conditions during the Middle Ages. It was also believed to prolong life.

Gorgonzola cheese has special PDO status, which means that it has a Protected Designation of Origin. The quality and authenticity of Gorgonzola is protected by international and Italian law with certain regulations concerning the manufacture and packaging of the cheese. In fact, a consortium was created by the Italian government in order to protect and oversee the production of Gorgonzola. Gorgonzola must be produced with milk from certain provinces in Italy, and it also must be produced in the Piedmont or Lombardy regions in Italy.

A centuries-old legend has it that a young boy working as an apprentice in a dairy was given the important job to oversee the production of the cheese. Even though this job required serious attention, the youngster worked attentively until one evening, distracted by a surprise visit from his girlfriend, he forgot to finish making the cheese. When he returned to work the next morning, the boy immediately realized his mistake and found the milk curds covered with mold. Aware of the trouble that he would be in if his master discovered his mistake, the apprentice decided to mix the ruined curds with fresh milk in an attempt to dissolve the mold. The blue-green veins did not go away, however, the boy quickly realized that he had invented a creamy cheese that tasted good: without intending to, he created Gorgonzola.

In the past, Gorgonzola could take one year to produce because of the long aging process. Today, the cheese is exposed to more oxygen, which shortens the process to three to six months. The cheese can be of a young or an old variety. Gorgonzola that has not been aged long is called Dolce and is creamier and milder than the aged version. It is good for sauces and spreads. Piccante and  Naturale Gorgonzola are the aged varieties. They are sharper and more crumbly which makes them good additions to the tops of prepared dishes or for eating by themselves. In fact, Gorgonzola is most frequently served as a dessert cheese at the end of a meal.

Gorgonzola cheese is an uncooked cheese made from whole cow’s and/or goat’s milk. The milk is added to Lactobacillus bulgaricus and Streptococcus thermophilus bacteria along with spores of the mold Penicillium glaucum or Penicillium roqueforti. After the whey is removed from the mixture, it is aged at low temperatures. As it ages, metal rods are inserted to create air channels that allow the cheese greater exposure to oxygen. The increased oxygen causes the mold spores to germinate much more quickly and create the blue-green veins. Gorgonzola is usually aged for three to four months, after which it is wrapped in foil.

Gorgonzola can be used in several ways. It is often served alongside fruit such as pears, grapes, and figs and paired with wine at the end of a meal. When used in dishes, it can be served cold (on a salad, for instance) or hot. Gorgonzola sauces can be created for topping vegetables and short pasta such as ziti, and it is sometimes heated and served atop baked oysters. Gorgonzola can also be melted into a risotto or served with Polenta. Gorgonzola is highly perishable so it must be refrigerated. It should be well wrapped in either aluminum foil or plastic wrap. It can be kept this way for a maximum of about 45 days. Gorgonzola cheese is a living food, so it will continue to mature as it is stored. It will develop a stronger flavor and become softer. If, however, the body of the cheese develops a pink or a brown tone, it is too ripe and should be discarded.

Many dishes prepared with Gorgonzola cheese are very fattening because they usually include heavy cream. The smart way to use this cheese is with moderation and low-fat ingredients.  Since it is a strong-flavored cheese a little goes a long way.  The recipes for the first and second courses below are less than 350 calories per serving and the appetizer and dessert courses are less than 200 calories per serving.

Arugula and Pear Salad with Pomegranate 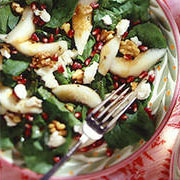 Make the balsamic syrup by placing vinegar in a small saucepan and cooking over low heat until thickened (or until it starts bubbling). Cool. Place the arugula and pears together in a mixing bowl. Season with salt and pepper. Dress with olive oil and lemon juice. Divide salad onto four cold plates and garnish with walnuts, cheese (1 tablespoon per plate) and pomegranate seeds. Drizzle a spoonful of balsamic syrup over each salad.

Pasta with Swiss Chard and Gorgonzola

You can use 12 cups of spinach instead of Swiss Chard. Do not add the spinach to the boiling water with the pasta until the last 2 minutes of pasta cooking time.

1. Bring 2 quarts water to a boil over high heat in a large pot. Add in the Swiss chard and pasta, lower heat to medium-high, and cook until pasta is tender about 3-4 minutes; drain.

2. In a large bowl add all of the remaining ingredients except for the milk, add in the cooked pasta and Swiss chard, stir until cheese is melted and all ingredients are well combined.

Serve over quick-cooking barley with broccoli or artichoke hearts on the side.

Combine 1/4 cup prunes, Gorgonzola, bread crumbs, and 1/2 teaspoon thyme in a small bowl. Cut a horizontal slit along the thin edge of each chicken breast, nearly through to the opposite side. Stuff each breast with about 2 1/2 tablespoons filling. Use a couple of toothpicks to seal the opening. Season with salt and pepper.

Heat 1 tablespoon oil in a large nonstick skillet over medium-high heat. Add the chicken and cook until golden, about 4 minutes per side. Transfer to a plate.

Reduce heat to low, return the chicken and any juices to the pan and turn to coat with sauce. Cover and cook until the chicken is cooked through, 3 to 5 minutes more. Remove toothpicks, slice the chicken, and top with the sauce. Peel pears, if desired, and cut lengthwise in half. (If you like, leave the stems attached to two of the halves for an attractive  appearance.) Use a melon baller or grapefruit spoon to scoop out the seeds. Bring wine, water, and allspice to a boil over high heat in a large saucepan or Dutch oven just large enough to arrange pear halves in one layer. Add pear halves. Reduce heat so as to maintain a gentle simmer. Simmer pears uncovered, turning over every 5 minutes with a large spoon until pears are almost tender when pierced with the tip of a sharp knife, 15 to 20 minutes.

Use a slotted spoon to transfer pears to a shallow bowl; cover tightly with foil to keep warm. Turn heat to high; boil juices in a saucepan until reduced to 1/3 cup, 16 to 18 minutes. Stir in vanilla. Transfer pears to serving dishes. Drizzle syrup over pears; top with cheese and pine nuts.

Tip: It’s not necessary to peel the pears. Many of the vitamins are just beneath the skin, and leaving the skin on helps keep the pear from becoming mushy.