Why Should You Make Homemade Pasta? 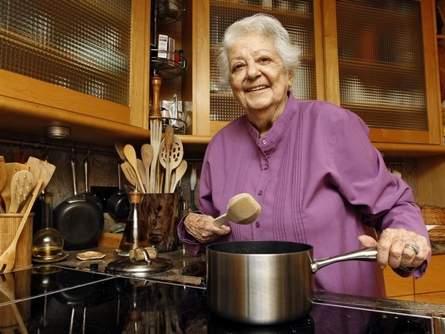 2012 Marcella Hazan in her kitchen in Longboat Key, FL

Marcella Hazan has been called the godmother of Italian cuisine in America. She introduced Americans to regional Italian cooking, pure flavors, fresh and varied ingredients.

Marriage to Victor Hazan, a New Yorker, meant straddling the Old World and the New. In 1969, Marcella began teaching Italian-cooking classes out of their small apartment kitchen in midtown Manhattan. Her first American students were six ladies she met while taking a course in Chinese cooking. “What do you eat at home?” they wondered, and so Marcella introduced them to lamb kidneys, squid, rabbit and fish with the head on. Thus, began her teaching career.

Though 88, officially retired and wrestling with back and other health issues, Hazan continues to teach. This time it isn’t in a refurbished 16th century palazzo in Venice. It’s on Facebook.
Hazan has many ardent fans. And in the twilight of her career, they have found in her a willing and still feisty teacher happy to offer advice, challenge assumptions and continue to teach. 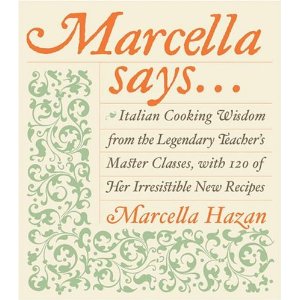 Marcella Hazan devotes a chapter to, “Why and How You Should Be Making Your Own Egg Pasta”.  After a discussion about how commercially made pasta is produced, she comments, “ What one responds to in homemade pasta, is its lightness, its buttery texture, its suave entry into the mouth, a deeply satisfying cohesion of pasta and sauce, and a buoyant, palate caressing richness of taste.  The only  egg pasta that delivers such sensations is one that you make at home, using low-gluten white flour for your dough and thinning it with gradually applied light pressure. Take into account, moreover, that when you make your own pasta you can produce noodle shapes that are usually unavailable commercially….”
Marcella also recommends using modern conveniences in making homemade pasta. She says,” You need a food processor for kneading the dough and a pasta machine ”  for rolling and cutting. She also notes that she tested her recipes using these gadgets and the pasta was just fine. 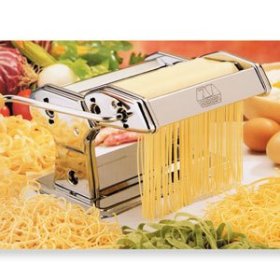 Here is my version:

Why should you make homemade spaghetti when you can buy a box of dried spaghetti in your supermarket? Fresh pasta is not inherently better than dried pasta; it’s just different – definitely lighter and more delicate than dried pasta. Use dried pasta when you want to enjoy noodles with a lot of texture or for heavy sauces; use fresh when you want a softer, subtler dish that will let a delicate sauce shine. Making homemade pasta in our busy world cannot be a common occurrence but give yourself a treat, every once in awhile, so you can experience this unique taste.

I prefer to mix the harder southern Semolina (durum) flour with the softer unbleached flour or the Italian 00 flour to give some extra body, gluten and flavor to the pasta. Italian-Style 00 flour makes a supple dough, that is smooth and easy to work with. The “00” refers to the grind of the flour, and how much of the wheat’s bran and germ have been removed, not to its protein level.

Whole eggs add an old World richness to the mix, which is why genuine fresh pasta has a yellowish hue like egg noodles. Extra virgin olive oil in my mix also adds moisture and flavor. Many recipes only call for salt in the boiling water. I use it in the mix and in the boiling water so the pasta will have flavor.

If you would like a closer look at the photos in how to make the homemade spaghetti dough, you can double click them for an enlargement.

Put all of the ingredients in the large bowl of a processor. Pulse until the mixture begins to form a ball.

Remove dough from the bowl and form into a round ball.  Cover the dough with plastic wrap and refrigerate at least 1/2 hour.

Wrap dough in plastic and refrigerate for 30 minutes.

Preparing the dough with a hand crank pasta machine.

Divide dough into about 3″ x 2″ pieces. Dust the dough with flour on both sides if the dough is too sticky. Start thick and gradually crank to desired thinness.

After the first pass through the machine, fold the dough in half to help develop the gluten. To make good straight edges, fold the ends of pasta sheet to the center and then rotate it 90º so that the folded edges are on the sides.

Cut the kneaded dough in half before rolling through the last setting.

Keep rolling the dough through the next smaller setting until you have reached the second to the last setting, but you can roll the dough to whatever degree of thinness you prefer. I prefer the next to last setting for spaghetti.

As you move to the thinner settings, your pasta will become become more delicate. If it tears as you roll it through, don’t worry, it’s not ruined. You can simply fold the pasta and re-roll. However, I have found the pasta recipe that I am using is very supple and I have never had the dough tear.

Place the rolled dough strips on floured kitchen towels to dry for 10 -15 minutes.

Cut the dried dough strips in half lengthwise before cutting with the spaghetti roller.

Put the dough through the spaghetti roller.

As soon as you cut the pasta, either place the cut pasta on a floured flat surface or hang it on a pasta drying rack.

Hang the cut spaghetti on a pasta tree.

You can also dry the spaghetti on floured kitchen towels.

This type of fresh pasta will stay fresh in the refrigerator for a few days, or it can be air dried on your pasta rack and then stored in an airtight container.

Since I make pasta early in the day, I place it in a container, sprinkled with semolina flour, and refrigerate the container until it is time to cook the pasta.

Fresh pasta can also be frozen in a vacuum bag. Do not keep dried fresh pasta out because of the eggs in the mixture.

Drop the pasta into a large pot of salted boiling water and boil until tender or “al dente” for about two to three minutes. Do not overcook the pasta to a mush. Drain well and serve.

Some Recipes To Cook After You Make the Spaghetti: 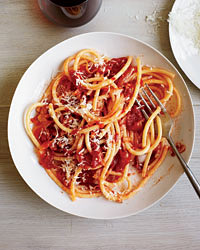 In a large, deep skillet, heat the oil. Add the onion and cook over moderately low heat until very soft, 7 minutes. Add the pancetta and cook until translucent, 3 minutes. Add the vinegar, wine, tomatoes, crushed red pepper and 2 tablespoons of water and simmer until thick, 30 minutes. Season with salt and pepper.

In a pot of salted boiling water, cook the spaghetti until al dente; reserve 2 tablespoons of the cooking water. Drain the pasta, add it to the sauce along with the reserved cooking water and cook over moderate heat, stirring, for 1 minute. Remove the skillet from the heat and stir in 3 tablespoons of cheese. Serve right away, passing more cheese at the table.

Spaghetti With Tomatoes, Capers and Olives

Begin heating a large pot of water for the pasta. Meanwhile, combine 2 tablespoons of the olive oil and the sliced garlic over medium-low heat in a medium saucepan or skillet. Cook, stirring often, until the garlic turns golden, about two minutes. Do not let it take on any more color than this. Remove the garlic slices with a slotted spoon and discard, then add the bread crumbs to the pan. Turn the heat to medium, and cook, stirring, until the bread crumbs are crisp. Remove from the heat, and pour into a bowl.

Return the pan to medium heat, and add the remaining olive oil, the red pepper flakes and the minced garlic. Cook for about 30 seconds until the garlic smells fragrant, and add the tomatoes, capers and olives. Bring to a simmer, and cook until the tomatoes have cooked down and smell fragrant, 15 to 20 minutes. Season with salt and pepper.

When the water comes to a boil, salt generously and add the spaghetti. Cook al dente,  drain, and toss with the tomato sauce. Sprinkle the bread crumbs and parsley on top, toss again briefly and serve, passing the Parmesan at the table. 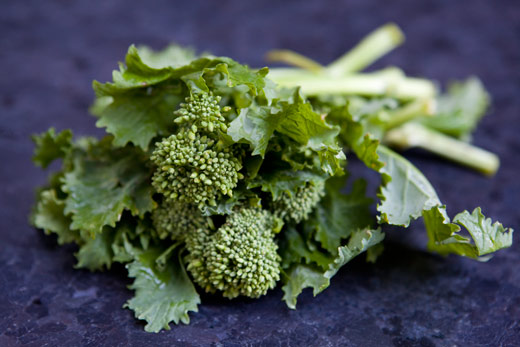 Cut off the broccoli rabe florets and coarsely chop the leaves and tender stems.

Bring a large pot three-fourths full of water to a boil. Add the 1 tablespoon salt and the pasta and cook until al dente.

While the water is heating, in a large fry pan over medium-high heat, warm the olive oil. Add the onion, garlic and crushed red pepper and sauté until soft, about 4 minutes.

Stir in half of the broccoli rabe, including the florets, coating them with the oil. Cook until the wilted, 2 to 3 minutes. Stir in the remaining broccoli rabe and cook, stirring occasionally, until beginning to soften, about 5 minutes.

Pour in the broth and reduce the heat to medium and simmer until the broccoli rabe is tender, 8 to 10 minutes more. Stir in the 1/4 tsp. salt and season with pepper.

When the pasta is ready, drain. Place the pasta in a serving bowl and top with the broccoli rabe sauce. Sprinkle with cheese.

Marcella Hazan on her first date with now-husband Victor in Cesenatico, Italy, 1952