Although no one really knows when the first bread was baked, bread has been around for thousands of years, as evidenced by the stone tools and ovens found in archaeological sites of men long ago. In ancient Rome, for instance, bakers were highly regarded. Baking was not only important, but also a ritual. Ovens were even built in temples. Romans were the first bakers to produce the flour to bake what is known today as “white bread”.  Romans were also responsible for tweaking the wheat’s milling techniques. Around 100 BC, it is believed that Rome contained more than 200 commercial shops that baked and sold bread. They also established a school of baking around 100 AD.

The roots of bread in Italy go far back in time. The average Italian will consume half a pound of bread a day. All Italian bread is not the same, however. This is a common misconception – that Italian bread is only one type of bread. If you travel to various cities in Italy, you’ll discover that each area has its own distinct recipe for making bread.  The vast popularity of brick ovens throughout the years has contributed a great deal to the abundance of bread in Italy. Round ovens built from brick or local stone have been around in Italy for a very long time. Unlike other nations, where individuals rarely owned full rights to use an oven, ovens in Italy were typically owned by families and were smaller in size.

Italians have high standards for their bread. They are known to allow the yeast to fully rise over the course of several hours, leaving a thin crust. Italians value the size of their loaves of bread and prefer their bread to have a soft and moist interior, which is ideal for absorbing olive oil, vinegar, tomatoes, and other select toppings.

When I think of Italian bread, ciabatta comes to mind immediately, with its hard crust and soft interior filled with holes. It is not difficult to make, but you need to follow all the steps in the process to achieve that well know result. It is a two day baking process (but not all day) to the completion of the bread. Ciabatta, or “slipper bread” can be found throughout Italy. One way to create the best texture is to use a biga, or starter, made the day before, a long rising time, and maintaining a loose, moist dough through the mixing and shaping process. This is the secret to good, crusty bread filled with holes.
According to Peter Reinhart, (a baking instructor at Johnson & Wales University and author of The Bread Baker’s Apprentice),  “This bread hails from an age-old tradition of rustic, slack dough breads, however, the name ciabatta was not applied to the loaf until the mid-twentieth century by an enterprising baker in the Lake Como region of northern Italy. He observed that the bread resembled a slipper worn by dancers of the region and thus dubbed his loaf ciabatta di Como (slipper bread of the Como).” 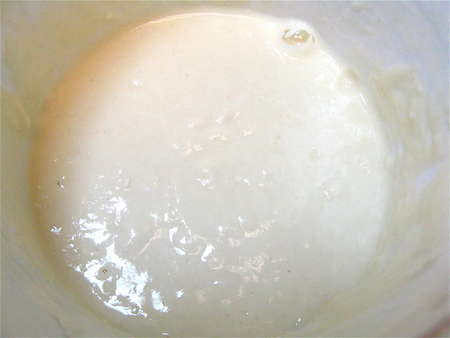 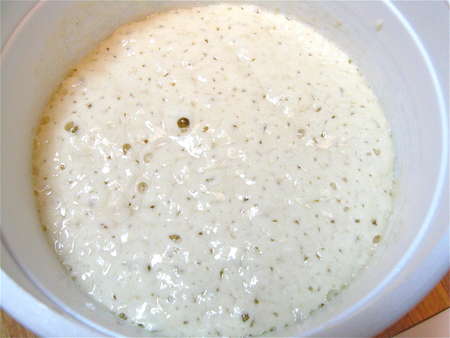 Cover bowl with plastic wrap. Let stand at room temperature at least 12 hours and up to 1 day.

Stir together yeast and milk in small bowl and let stand 5 minutes, until creamy.

In bowl of a standing electric mixer, with dough hook, blend together milk mixture, sponge, water, oil and flour at low speed until flour is moistened. 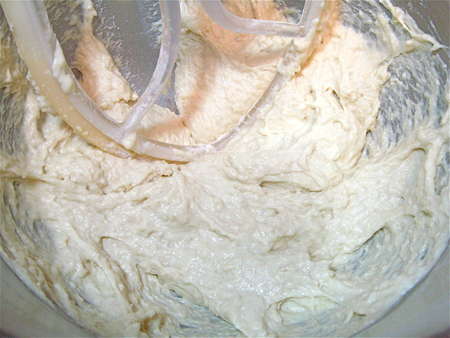 Because this dough is so soft, it’s virtually impossible to knead it by hand, so you will need an electric mixer to knead the dough. 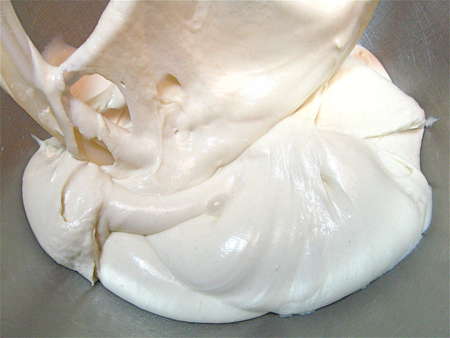 Beat on medium for 3 minutes. Add salt and beat for 4 more minutes. 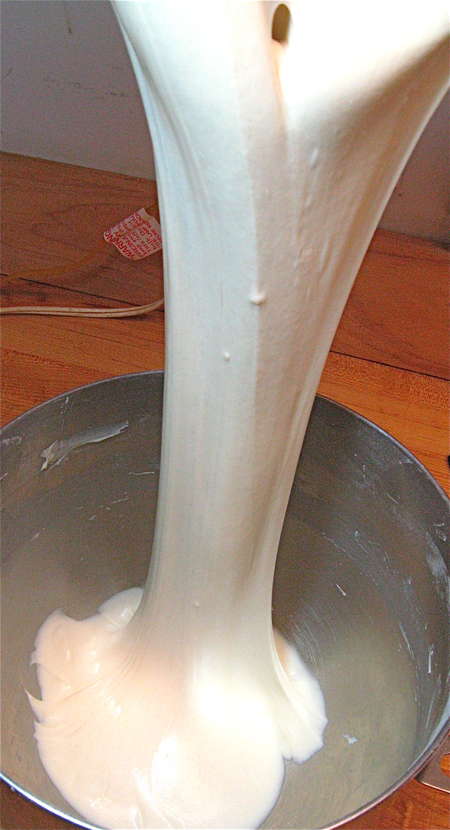 The dough will be VERY sticky and full of bubbles. Scrape dough into oiled bowl and cover with plastic wrap, until doubled- about 1 1/2 to 2 hours. 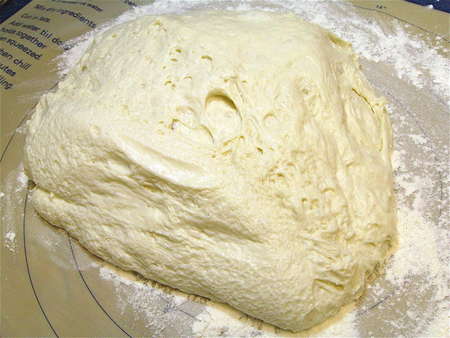 Very gently turn the dough out of the bowl onto your work surface; you don’t want to deflate it. It’ll lose a bit of volume, but don’t actively punch it down. Use a well-floured surface and a bowl scraper, bench knife, or your fingers to divide the dough in half. You should have two fat logs, each about 10″ long x 4″ wide. 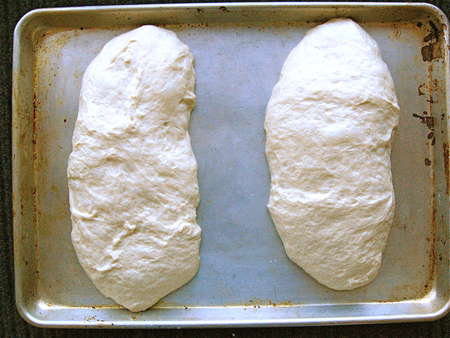 Handling the dough gently, transfer each piece to the baking sheet, laying them down crosswise on the sheet. Position them about 2 1/2″ from the edge of the pan, leaving about 4″ between each log. 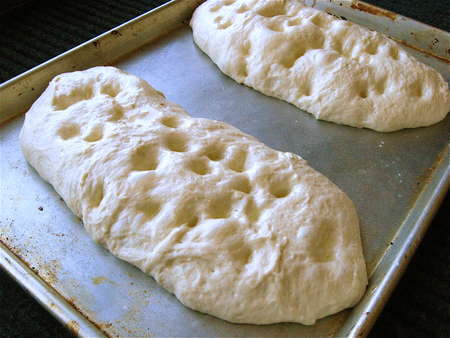 Dip your fingers in flour and dimple loaves and dust tops with flour. 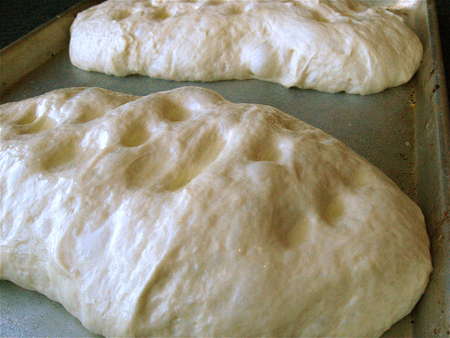 Towards the end of the rising time, preheat the oven to 425°F.

You’ll see that the dimples have filled in somewhat, but haven’t entirely disappeared. Spritz the risen loaves with lukewarm water and put the pan in the oven on a center rack. Before you close the oven door, spray water on the hot oven floor to make a nice crust on the bread. Bake 20 minutes or until golden brown. 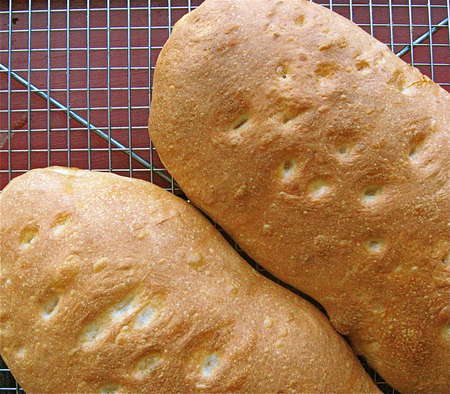 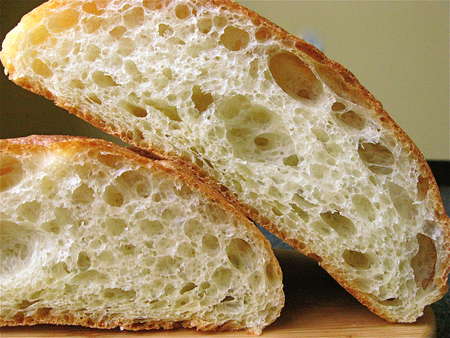 If you enjoy bread baking and would like to try some other recipes, go to the King Arthur Flour website for a wealth of bread recipes, http://www.kingarthurflour.com/recipes/bread