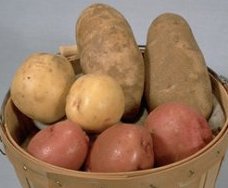 Potatoes originally came from South America specifically from the Andes mountains and they were brought to Europe by early Spanish explorers.  In 1565, Spain’s King Philip II is said to have sen a gift of potato tubers for Pope Pius IV in Rome, who passed samples on to a cardinal in Belgium.  Along with the tubers went their Italian name – tartufoli- and the samples were disseminated throughout Europe.   Wherever the potato was introduced, it was considered weird, poisonous, and downright evil.

European immigrants introduced potatoes to North America several times throughout the 1600s, but they were not widely grown for almost a century. Not until 1719, when Irish immigrants brought the potato to Londonderry, New Hampshire, were potatoes grown on a large scale. Again, potatoes were slow to gain popularity. Even when they became the second largest food crop in America, they were still used primarily as animal fodder.

Although the potato – called patata by modern Italians – was a staple food for generations of rural families, potato growing in Italy has been declining since the 1960’s. Large areas of land are unsuitable for potato growing and have since been abandoned.  Pasta-loving Italy has one of the lowest levels of potato consumption in Europe.  They do not use sweet potatoes in Italy, but pumpkin is a favorite ingredient for a number of dishes, including ravioli and soups.  Marcella Hazan notes in her book that she could not get the right textured pumpkin here in America, but found that the orange-fleshed sweet potato came the closest.

In Italian cuisine, potatoes are used as a complement to other ingredients in a dish, such as  soups, frittatas, stews or salads or baked alongside fish or chicken.They are a nutrient filled vegetable despite their carbohydrate level.

It is a misconception, though, that they only contain carbohydrates and calories!  Potatoes are also a  rich source of  vitamin C, potassium, manganese, copper, vitamin B6 and dietary fiber.  If consumed in the right form and with moderation, potatoes can make for a very healthy, high fiber vegetable choice. 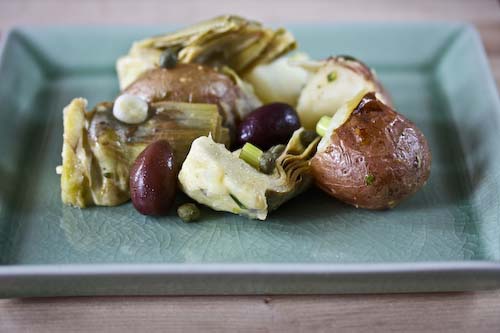 You can substitute 1 pound green beans for the artichokes as an alternative.

In a large bowl combine the first 9 ingredients and set aside.

In a large pot simmer potatoes in salted water to cover until tender when pierced with a fork, about 10 minutes.  Drain in a large colander and move to the bowl with the dressing.

In the same saucepan cook artichokes (or green beans) in 3 inches salted boiling water over high heat until crisp-tender, about 2 minutes. Drain in a colander and add to potatoes.
Mix well, let marinate and serve at room temperature. 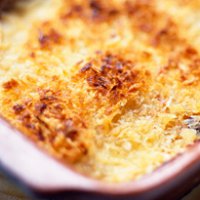 In a skillet, saute onions in 1 tablespoon olive oil until soft and slightly caramelized. Add tomatoes, salt and pepper to taste and oregano. Cook until sauce thickens slightly, about 10 minutes.

Bake for 30 to 40 minutes, until potatoes are fork tender. 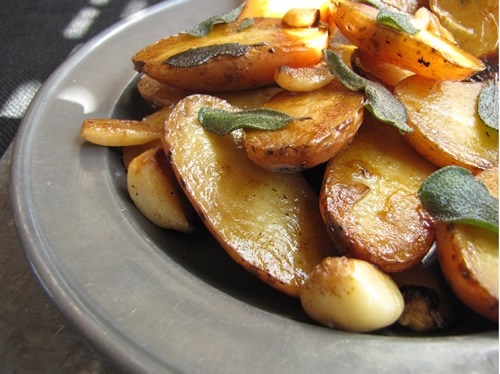 For this dish, choose fingerlings that are all about the same thickness (length doesn’t matter), so that they will all cook in about the same amount of time.
Serves 4

In a large (10-inch) straight-sided skillet with a lid, heat the butter and olive oil over medium-high heat. When the butter has melted and is foaming, add the sage leaves and cook, stirring a bit, until the sage leaves have turned color and are crispy and the butter is golden brown, about 2 minutes. (Watch carefully so that they don’t burn; they will stiffen and curl and turn grey as they crisp up.) Remove the pan from the heat and transfer the sage leaves with a fork or tongs to a plate.

Put the pan back over medium to medium-high heat and immediately add the garlic and potatoes. Season them with the 1/2 teaspoon salt and toss them in the butter/oil mixture. Arrange the potatoes cut side down, partially cover the pan and cook until the bottoms of the potatoes are nicely browned, 8 to 10 minutes.
Add the chicken broth and partially cover the pan again. Bring the broth to a gentle simmer and cook until the broth has reduced to just a few tablespoons,  about 10 to 12 minutes. 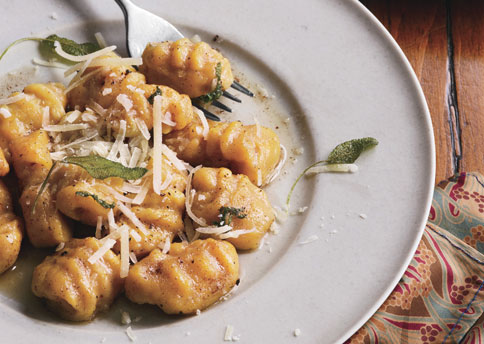 When making gnocchi, I always like to mix the potato with another vegetable to reduce the calorie level.  You could also substitute sweet potatoes for the russet potatoes or use all sweet potatoes in the recipe below.

Peel and quarter the potatoes. Boil until very fork tender, about 15 minutes. Drain and return the cooked potatoes to the hot pan. Let them dry out over medium heat for about 30 seconds.  Let cool a bit and then pass the potatoes through a potato ricer.

Cut the squash in half and roast in the oven, see post http://jovinacooksitalian.com/2012/05/08/make-dinner-sunday-for-your-mom/

After the squash cools, scoop out the flesh and mash it. Add the squash to the potatoes and add the egg substitute, the cheese, nutmeg, garlic, salt, and pepper. Mix well.  Sprinkle 1/2 cup of the flour over the potatoes and  press it into the potatoes. Fold the mass over on itself and press down again. Sprinkle on more flour, little by little, folding and pressing the dough until it just holds together and seems a bit sticky.

Keeping your work surface and the dough lightly floured, cut the dough into 4 pieces. Roll each piece on a generously floured board, into a rope about 1/2-inch in diameter. Cut into 1/2-inch-long pieces. You can cook these as is or form them into the classic gnocchi shape with the tines of a fork.  Roll the gnocchi along the times of the fork making light indentations and curving the gnocchi just a bit.

When ready to cook, bring a large pot of water to a boil and add salt. Drop in the gnocchi and cook for about 90 seconds from the time they rise to the surface. Remove the cooked gnocchi with a skimmer, shake off the excess water, and place in a serving bowl.
Gently mix with the Sage Pesto

Put the food processor on and add garlic, pulse until the garlic is minced. Remove lid and add walnuts, cheese and sage. Add a big pinch of salt and of freshly ground pepper.