How Many Ways Can I Make Scallopini?

When I was growing up, veal dishes were on our dinner table regularly and I know I did not even think about where veal came from in those days. My father would go to the butcher shop and bring home a couple of pounds of veal cutlets, proclaiming “how beautiful they were”. My mother usually breaded and fried the veal in oil; the basis for veal parmesan.  We usually just ate it as fried cutlets but occasionally with tomato sauce.  Most of the Parmesan style dishes are not found in Italy but have developed, over the years, into Italian-American cuisine.

In the first few months of my marriage, I decided to experiment with one of the veal scallopini dishes from my Ada Boni book. I made the Veal Scallopine with mushrooms and wine. My husband loved it; so I added it to my recipe box. Shortly after, we invited my in-laws for dinner and my husband wanted me to make this dish. I knew his mother liked Italian food but I wasn’t sure about his father. I asked what he liked to eat and my husband said he was “a meat and potatoes man”.  I thought, well, this will work. I always served it over pasta with 2 small cutlets per person, but I made a little extra that day and thought “just in case”.   When we sat down at the table for dinner, we passed the serving plates and my father-in law said he didn’t eat pasta. I said to my self, UH OH, as he proceeded to take several helpings of the veal and said , “it wasn’t bad.”  I was glad I made enough pasta for the rest of us.

Scallopine is an Italian dish made with thin ¼ inch slices of meat (traditionally veal) that are pounded with a mallet to approximately 1/8 of an inch. The veal used is generally taken from a muscle and is cut across the grain and trimmed of any fat. This makes veal scallopine a very low calorie cut of meat. Scaloppine is a fairly quick dish to prepare, since the thin slices of meat require very little cooking time. The classic veal scallopine is often dredged in flour with a few Italian herbs, salt and pepper, and then cooked in a skillet in oil and butter. There are a few traditional additions, such as capers and parsley and sometimes cooked mushrooms. White wine is added to the pan, once the meat is removed, to make a light sauce.

If lemon juice is added to scaloppine dishes then the dish would be called  piccata. Adding Marsala wine to scaloppine dishes is traditionally referred to as Veal Marsala. Using chicken or turkey breasts instead of veal can further reduce the fat content of veal scallopine; and if you reduce the amount of fat you cooked the meat in, you will have a healthy entree. Scallopini dishes are good quick fix dinners for busy weeknights.

I know that veal is the traditional type of meat used in scallopini dishes in Italian cuisine but I prefer to use chicken, turkey, pork or fish in my recipes.  Animals were once confined to limit their movement; hence, the meat would be more tender and pale. In the past, Milk-fed veal came from calves up to 12 weeks old that had not been weaned from their mother’s milk, but veal of this quality is rare in today’s supermarket. Animal rights activists made the public aware of such practices in the 1980s.  For that reason, the consumption of veal was a source of controversy. In recent years, veal producers have attempted to make their system of production more humane.

Today, shoppers are more likely to find calves fed a nutritionally balanced milk or soy-based diet that is fortified with essential nutrients.  Many producers of veal are committed to animal friendly housing and humane treatment of their animals. The calves feed on a combination of milk and nutrient rich grains free of antibiotics. New facilities in America sometimes surpass strict European humanely raised standards. While the old veal was white and bland, the new veal is pink and flavorful.  Although veal is supposed to be leaner and more tender than beef, not all veal is made equally, and not all cuts carry the same level of quality.

According to the website, Organic: Love to Know, “A good way to tell if veal is humanely raised is simply by looking at it. If it’s pink, that most likely means the calf had an adequate supply of iron.” They conclude that this pink veal is sometimes called Meadow, Rose, Pastured, Free-range, and Grass-Fed.  The New York Times adds that you should look for the label “certified humane. ”These “Certified Humane” calves are now given abundant space free from harsh weather and given good, dry bedding. Furthermore, calves are kept in small groups with others of similar size and age, allowing each to receive the full care from the veterinarian or the farmer.  The pinker the meat, the older the animal was at slaughter and, therefore,  the meat may be tougher and stronger-flavored. If the meat is a reddish tone but still marked as veal, it may be a calf between 6 and 12 months and should more appropriately be called baby beef. Or, the calf may have been allowed to eat grains or grasses, which also darken the meat.  The choice is yours.

Anything you can make with veal, you can make with chicken, turkey, fish or pork. I will describe below the different preparations for the type of meat or poultry that you choose to use. To prepare the cutlets, you will need is a meat mallet with a smooth side. The flouring process is quite important.  The flour helps brown the meat, but also lends more texture to any sauce produced at the end. Without flour, the addition of canned tomatoes or fresh tomatoes is likely to result in a watery sauce. In the wine deglazing process of a traditional scallopine dish, the collection of flavorful bits that accumulate in the middle of the pan while cooking the meat, is made easier when the meat is flour coated.

To serve four, start with four 6-ounce boneless and skinless chicken-breast halves.  Cut each breast crosswise on the bias into two equal pieces. Place the pieces between two sheets of plastic wrap and pound them with the smooth side of a meat mallet to a thickness of about ¼ inch. Proceed with the recipe.

To serve four, start with eight 3-ounce slices of boneless pork tenderloin completely trimmed of fat. Place the slices between two sheets of plastic wrap and pound them several times with a meat mallet to a thickness of about ¼ inch. Proceed with the recipe.

To serve four, start with eight 3-ounce turkey cutlets. (Most turkey cutlets are sold pre-cut in supermarket meat cases; if not, use boneless turkey breasts and cut then into slices and come as close as you can to these weights.) Place the slices between two sheets of plastic wrap and pound them with the smooth side of a meat mallet to a thickness of about 1/ 4 inch. Proceed with the recipe.

Fish is not pounded, so buy thin fillets (4 small white fish fillets (such as tilapia, flounder or sole), about 1 pound total).  Salt & pepper the fish.  Put them into a shallow dish and cover with milk. (Soaking in milk helps to freshen the fish). Set aside.  Lift out of milk and proceed with the recipe.

For each batch of 3 cutlets:

Season the scallopine with salt and pepper. Dredge in flour to coat both sides lightly and tap off excess flour.

Heat 1 tablespoon olive oil in a small skillet.  Cook the cutlets until golden brown on the underside, about 3 minutes. Flip and cook until the second side is lightly browned, about 2 minutes. Remove to a platter and cover with foil. Repeat with remaining scallopine.

You will need the following ingredients for the sauce:

If you like the taste of lemon, you can add 1 tablespoon of fresh lemon juice. The resulting dish is called Piccata.
Double the ingredients if you are making 6 cutlets.

Add all the sauce ingredients to the skillet, except the parsley.  Bring to a boil, reduce heat and simmer about 30 seconds.  Pour sauce over cutlet that are on the platter and sprinkle with parsley.  I like to serve scallopini with a green vegetable. 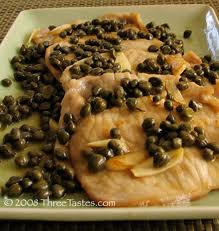