What Else Can I Do With Chicken? 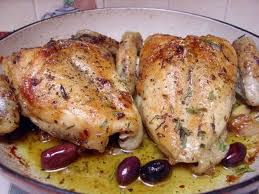 Most of the chicken recipes we associate with Italian cuisine were really developed in the United States by the Italian immigrants. When chicken is eaten in Italy,  it is a simple preparation ,usually browned in olive oil and flavored with olives or lemon and garlic. Additionally, the meat is probably pheasant, squab or rabbit and not chicken. Some of the most well know dishes in America are Chicken Parmigiana, Chicken Marsala, Chicken Cacciatore and Chicken Tetrazzini. These dishes have been on Italian restaurant menus for years and cooked in many homes across the world, but they are high calorie dishes.

Chicken (or Veal) Parmigiana or also known as Chicken Parmesan is made by dipping a chicken breast in a mixture of beaten eggs and bread crumbs, shallow-fried and topped with a tomato sauce and mozzarella. It is then usually baked until the cheese is melted. 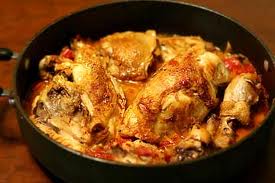 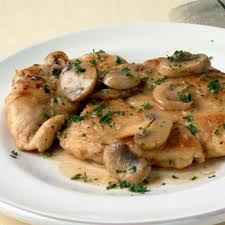 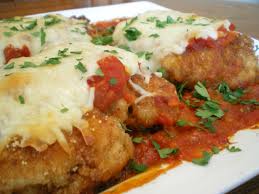 Chicken Marsala is a traditional Italian dish that starts with boneless chicken breasts that are coated, usually with flour.  The sauce  is made of butter, olive oil, mushrooms, Marsala wine, and sherry. Salt, pepper and oregano season the dish. Some chicken Marsala recipes also include capers and lemon juice.

Chicken Cacciatore ( means “hunter’s style) and is a country-style dish where a whole chicken is cut up and browned in olive oil, then braised in a light tomato sauce with vegetables.

Chicken Tetrazzini is a dish made with mushrooms, cream, parmesan cheese, eggs, onion, pepper, salt, milk, sherry and cooked spaghetti. The dish is said to have been named for the Italian opera singer Luisa Tetrazzini (1871-1941), called “The Florentine Nightingale.” She was extremely popular in the United States and was a star of the San Francisco Opera. She also was a long-time resident of San Francisco. It was a culinary tradition to name new dishes after personalities of the day, and Chefs of the 19th century use to flatter great prima donnas, like Luisa Tetrazzini, making them the inspiration for their creative efforts and then naming dishes for them.
This dish is also a great example of a high calorie entree. Let me cite for you the recipe from the Italian Inn in Tulsa, Ok.

I should tell you that one serving equals 1664 calories and 92.7 g of fat, before you go ahead and make this dish.

Childhood Memories
Certain chicken dishes stand out in my mind from my childhood. My mother often make scaloppini dishes (which are thin cutlets pounded thin, breaded, and pan fried) with veal or chicken. Chicken Cacciatore was on the menu regularly .  I remember that my father and grandfather would sometimes get together on a Sunday and prepare chicken cacciatore with rabbit.
That was a dinner I passed up.
A favorite dish of my parents was a dish popular in the Italian-American community called Chicken Scarpariello.  The recipe below is similar to the dish my mother prepared.  This version is from the famous restaurant in New York City, Rao’s.

Heat oil in a large, deep sauté pan over medium-high heat.  Sauté sausage for about 8 minutes until lightly browned.  Using a slotted spoon, remove sausage from pan and set aside to drain.  Reheat oil so that it is hot but not smoking, pat chicken dry, and sauté chicken for about 15 minutes or until it is almost cooked through.
Stir in bell peppers, onion, and garlic and sauté for 5 minutes or until vegetables are soft and beginning to brown.  Drain off all excess oil.  Return sausage to pan.
Add wine and chicken broth to chicken, sausage, and vegetables and bring to a boil.  Stir in hot and sweet vinegar peppers, vinegar, oregano, and salt and pepper.  Again, bring to a boil.  Lower heat and simmer slowly for about 10 minutes or until flavors have combined and sauce has reduced.  Remove from heat and serve.
serves 6

I really didn’t care for the flavor of the vinegar peppers in the recipe above and the recipe calls for a lot of oil in its preparation. I did like the idea of roasting chicken, potatoes and peppers for an entree and I worked on making a healthy dish with these ingredients.

Directions
Preheat oven to 450 degrees.
Pour 1 tablespoon olive oil in bottom of a roasting pan and spread over the bottom of the pan with your fingers. Place chicken in the pan, skin side down.  Salt and pepper both sides of the chicken pieces and scatter the sausage pieces around the chicken.

Bake 15 minutes
Turn chicken pieces and bake 15 minutes
Squeeze lemon over chicken, place the lemon skins in the roasting dish with the chicken and sprinkle chicken with minced garlic and oregano.

Add the sliced potatoes onions, and peppers to the pan and sprinkle with salt.

Lower oven temperature to 400 degrees
Cover pan with foil and bake 1 hour, turning the ingredients after 30 minutes.
Serves 6-8 and you do not need to add anything else to this menu.